There are a number of important oral manifestations of Diabetes. Dental caries is one of the most common oral diseases which is modified when Diabetes is present. Root caries is more prevalent in patients with Diabetes. In this study, we have demonstrated that it is possible to eliminate the excess of glucose contained in the saliva of Diabetics. That could be one of the solutions to avoid infection, pain, tooth loss and reduce masticatory functions due to dental caries.

There are a large range of oral manifestations that have been reported in patients with Diabetes. These include increased extent and severity of periodontal disease, changes in the prevalence of dental caries, burning mouth syndrome, Candida infection, Xerostomia (Dry mouth), altered taste sensation, altered tooth eruption, and hypertrophy of the parotid glands (Park et al., 2009). Non-dental health care providers and patients need to be aware of the changes in the oral cavity associated with Diabetes, emphasize the importance of an oral evaluation when the diagnosis of Diabetes is first made, and make appropriate referral if the patient reports a problem. Dental professionals have to be familiar with the range of oral disorders in patients with diabetes, and how these problems should be managed in patients with the disease. The results of the ex-vivo tests described in this paper, explained how one of the two common oral diseases (periodontal and caries) might be reduced. The method comprises the use of oral health care products formulated with a “Milk Protein Extract” which has been shown to decrease salivary glucose in the Diabetic mouth which could lead to a control of the caries. 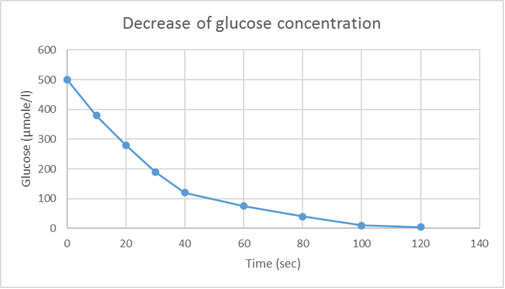 Figure 2: Elimination of a standard glucose solution (500 µM/l) by the MPE

The study was carried out to check if the MPE contained in the AnOxident formulations, is able to decrease the salivary glucose quantity. In fact, when we collected the saliva, we treated the sample with the MPE formulation and we stopped the reaction at 30 seconds, 60 seconds and 120 seconds. Using the methodology of the “hexokinase” method, we analyzed the concentration of the glucose which remained in the saliva samples after the treatment by the MPE. The results are summarized in the table 1:

Table 1: Decrease of the salivary glucose in normal and Diabetic subjects using MPE after 30, 60 and 120 seconds’ contact

As we can observe, in the case of a standard glucose solution, we can eliminate almost all the quantity of glucose due to the presence of the MPE. On the other hand, this degradation of the excess of glucose is not total when the tests are carried out ex-vivo with saliva. Visibly, a certain quantity of the salivary glucose stays more or less constant in the saliva after the application of the MPE. That has to be due to an inhibitory effect due to the presence of other molecules in the saliva. Nevertheless, it is possible to eliminate the excess of glucose reaching a concentration similar to the level of the one existing in the normal subjects.

Several studies based on clinical observation have suggested that the teeth of Diabetic patients are predisposed to dental caries (Miralles et al, 2006 – Taylor et al., 2004 – Twetman et al., 2002). Other studies on animals reported the same (Borghelli et al., 1966 – Hartles et al., 1958). Dental caries is the indirect results of the metabolism of fermentable carbohydrates by specific oral bacteria such as Streptococcus mutans, Lactobacillus species, with the by-product of the metabolism which is lactic acid acting on a mineralized substrate which is the dentition. The rate of D-glucose utilization by oral bacteria at a physiological concentration of D-glucose in saliva (50 µM) was estimated at 0.047nmole/min per 106 bacteria (Cetik et al., 2013). This demonstrates that the glucose concentration in stimulated and unstimulated saliva in diabetics is important enough for the bacteria to metabolize the lactic acid. The result is the demineralization of the teeth, ultimately leading to cavities. Advanced dental caries is associated with involvement of the neurovascular tissue within pulp chamber of the teeth, resulting in pain and abscess formation that lead to the tooth extraction.

In this work, we have demonstrated ex-vivo the possibility to eliminate the excess glucose contained in the Diabetic saliva. Using a specific formulation called “Milk Protein Extract”, it is possible to eliminate the glucose in excess glucose in the Diabetic saliva reaching a level similar to that one existing in the saliva of normal subjects. Although some scientists are not convinced that there is a relation between Diabetes and the unusual appearance of dental caries, we think that we cannot exclude the fact that a constant production of saliva during the day, having an excessive concentration of glucose (4 to 5 times the concentration of glucose in normal subject) is a factor causing caries. On the other hand, considering the pathogenesis of dental caries, it should be noted that the lesions have a multifactorial etiology involving 4 main factors: glucose and other sugars in food, acid producing pathogenic bacteria, predisposing host factors such as behavioural characteristics of the host that affect susceptibility to dental caries) and time (Kyes et al., 1961 – Reich et al., 1999).

Nevertheless, we cannot consider that the elimination of the excess glucose is going to solve all the problems of oral health in Diabetics. As we have underlined previously, the other common oral complication of Diabetes is periodontal disease. Periodontal diseases are a group of inflammatory disorders of the supporting tissues of the teeth, which includes the gingiva (mucosal tissue around the teeth, cementum, the periodontal ligament). The pathology of the disease is an inflammatory lesion induced by the biofilm bacteria, damaging the gum cells and provoking the oxidative stress which corresponds to an over-excess of the free radical production versus the antioxidant activity molecules. The composition of the MPE comprises several ingredients such as the vitamins E and C, glycine, glutamic acid and cystine as precursors of glutathione and also glutathione itself. The formulation also contains the DUOX system which is able to control the H2O2 produced by the free radicals in inhibiting the growth of the bacteria in presence of the excess of glucose.

In the final formulation of AnOxident, in addition to MPE, there is anti-oxidant plant extract which neutralizes the oxygen radical (O2°-) and apo-lactoferrin which chelates iron, to avoid the production of the hydroxy free radical (OH°). All these elements play an important role in neutralizing the free radicals responsible for the inflammatory problems of the gum cells (gingivitis). MPE also contains certain elements susceptible to controlling the growth of the microorganisms that are organized in biofilm or in planktonic forms, which could impact on repair of the mucosal cells damaged by the bacterial lipopolysaccharides.

It would be interesting to carry out other in vivo studies on Diabetic subjects to assess the activity of the complete formulation of the AnOxident product to see how the combination of ingredients acting at different levels in the mouth, can bring a general improvement in the oral health of the Diabetic subjects.